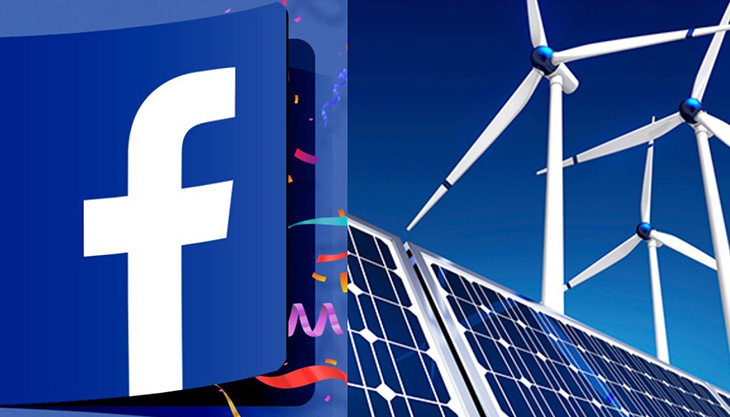 Facebook researchers to use A.I. to attain renewable energy storage

Technology adoption has always been a pro asset for companies, be it a small or a massive brand such as Facebook, Google, and Apple. Also, not to forget the path of coming out as a clean brand has propelled them to take cleaner approaches and innovations such as using Artificial intelligence to create new electro catalysts that are sustainable in nature.

As per an expert network company, Facebook and Carnegie Mellon University have announced that they are trying to use AI to find new “electro catalysts”. They are collaborating to create sustainable and energy-efficient data centers that come out as clean and environment-concerned brands.

In simple terms, Facebook is trying to create Electro catalysts which can be used to convert the excess solar and wind energy into fuels that are easier to store. It basically helps to store electricity generated by renewable energy sources and to improve renewable energy storage.

Facebook is to use AI to find new Electro catalysts

Facebook is one of the largest corporate purchasers of renewable energy which has also signed a deal for more than 5 gigawatts of “clean” power out of which 3.5 gigawatts is supposed to be online by the end of the year.

As per the experts consult, Facebook utilizes this amount of power and energy to run its vast data centers and its social media platforms. However, according to industry experts, Facebook with other technology firms has been using a huge amount of energy just for its data centers which have been considered as a faulty step.

Nonetheless, the electro catalysts that Facebook is planning and going to create to convert extra solar and wind power that is in itself intermittent in nature will be difficult to convert to other useful fuels that are easier to store.

Facebook is set to make the power grids greener by working on balancing the discontinuous supply of power attained from renewable energy sources such as wind turbines and solar panels into a steady one that is capable of satisfying the demand in the market.

However, the storage process of renewable energy in batteries in excess can be a likely solution but it might become exceedingly expensive and cumbersome if used in the long run.

Also, if the stored electricity is to be converted into other clean energy such as ethanol, hydrogen, and ammonia, the process would demand a great dependence on expensive catalysts. Platinum is one such expensive catalyst that makes the process quite an inefficient one which wastes a good amount of electric energy.

So, to provide a better solution to a complex issue, researchers from Facebook are working with chemical engineers from Carnegie Mellon University in Pittsburgh to drive innovation in the field. As per the top researchers, they can test tens of thousands of positive catalysts a year but as per Facebook and Carnegie Mellon, they can double this number up to millions and even billions of catalysts just with the help of Artificial Technology.

Both the institutions believe that by using a method of machine learning based on the deep neural networks, it can develop and train an algorithm to make exact predictions about the catalytic potential of two compounds in just seconds.

According to Facebook, the “Open Catalyst 2020” data set required 70 million hours of computing time to produce. The data set includes “relaxation” calculations for a million possible catalysts as well as supplemental calculations.

“Relaxation” is a term widely used for the measurement in catalysis, it is calculated to check if a particular combination of elements will make a good catalyst or not. Each calculation of relaxation which simulates how atoms from different elements will interact takes scientists about 8 hours to work but as Facebook claims that using AI software can make it up to in seconds.

Many tech giants are using AI to help speed up the scientific calculations and different observations in different fields.

ExpertsConsult being a vast expert network company of subject-matter experts provides
Valuable market insights on a global scale. Our subject matter experts are rich in experience and possess knowledgeable insights into the market that not only helps in understanding the target audience and particular industry but also helps in reshaping and building trust by providing potential growth.

To gain valuable market insights and knowledge, contact us at info@expertsconsult.org.